From Iraq to Minneapolis, Nonviolence Group Worked to Prevent Voter Intimidation During Election

Nonviolent Peaceforce, which is stationed in conflict zones around the world, brought unarmed civilian protection tactics to the Twin Cities during election week. 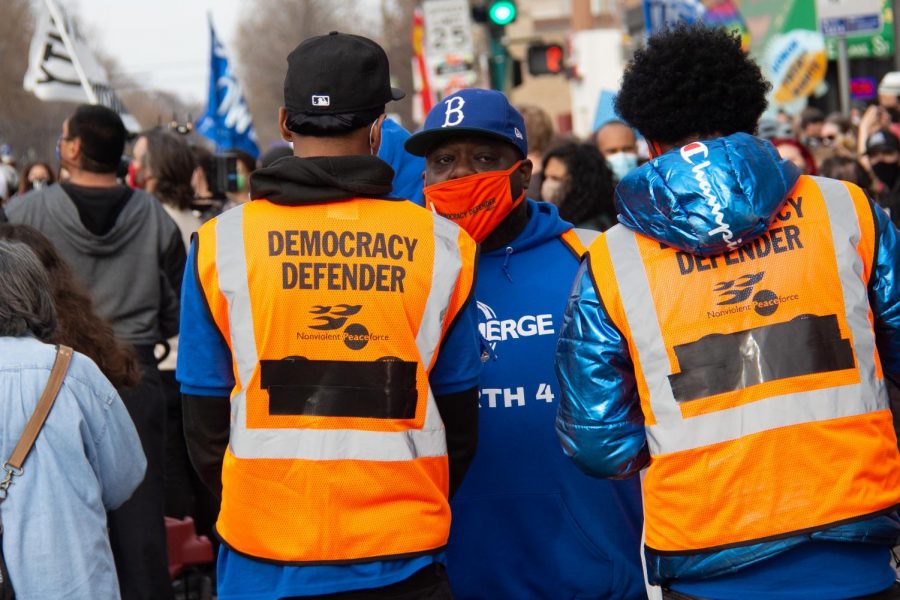 Volunteers from the Nonviolent Peaceforce oversee crowd safety at the “Together We Rise” protest event on Saturday, Nov. 7. J.D. Duggan

NP uses nonviolent means to prevent civilian violence in conflict zones around the world, including in South Sudan and the Philippines. The group used these same unarmed de-escalation strategies in the Twin Cities to guard the polls on Election Day from people who sought to intimidate voters.

On Nov. 3, 250 volunteers donned bright orange vests marked with “Democracy Defenders” and worked at 30 polls in the Twin Cities area for one of NP’s first civilian protection projects in the U.S.

“We had to prepare folks for how to de-escalate [voter intimidation], how to position ourselves in a safe way … interacting with them by killing them with kindness,” said Frank McCrary III, a captain for volunteers at North Minneapolis polling sites and an organizer with Service Employees International Union Local 26 (SEIU), a regional labor union.

NP’s work centers around principles of nonviolence and nonpartisanship — but the group ensures that locals lead the work. The organization has paid staff in the other global locations who work to ensure safety for elections, funeral parades and trips to escort refugee women when they leave their camps.

“Why [NP is] so important is planting the seed,” McCrary said. “So, let’s plant the seeds so this can be germinated and other folks can take this information and train the trainers to get that stuff out there, so this can keep on going.”

The group started training U.S. volunteers in June, which it had only done once before — a few years ago during the protests against the Dakota Access Pipeline on the Standing Rock reservation.

For Election Day, NP and SEIU Local 26 trained volunteers from local community organizations about situational awareness and de-escalation tactics before they were stationed at polling sites and helped escort a Minneapolis protest a few days later.

Last Saturday, about 20 volunteers suited up to marshall the March to Decide Our Future protest as the group moved down East Lake Street. 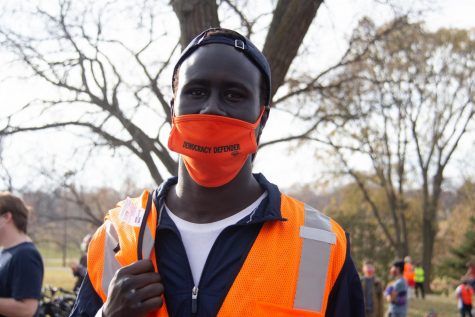 Volunteers from the Nonviolent Peaceforce help to control crowds and deescalate conflicts at the “Together We Rise” protest event on Saturday, Nov. 7. (J.D. Duggan)

“We wanted to come to the United States because there’s so many indicators of ongoing violence, political polarization, economic difficulties, racial injustice,” said Marna Anderson, director of NP’s U.S. office.

The group’s U.S. branch, headquartered in St. Paul, has mainly done advocacy and fundraising to support other branches in South Sudan, Myanmar, Iraq and the Philippines. Leadership decided to start offering unarmed civilian protection in the U.S. after the George Floyd protests.

Christopher Grathwol, a University of Minnesota student completing a master’s degree in human rights, had just started researching nonviolence organizations, including NP, on behalf of the University’s Human Rights Lab.

“It was interesting in that aspect as well, to kind of take what I have learned about South Sudan and the Philippines and Colombia and have it be applied to my own neighborhood here in the United States,” said Grathwol, who acted as a poll watcher with NP.

Mel Duncan, NP co-founder and director of advocacy and outreach, said the group only offers its services when local community organizers request help and collaboration.

“They know their communities,” Duncan said. “Anything that’s sustainable will have to depend upon those communities taking responsibility and doing the work. We’ll only be there for a limited period of time.”

McCrary said he plans to continue working with NP for local initiatives, like training people in Twin Cities neighborhoods about de-escalation, so they could have resources to “make the police the last resort instead of the first one.”

But Duncan said that “unfortunately,” the group is prepared to attend more events and train more volunteers in the U.S. in the coming months.

“Scabs have been ripped off of old wounds, 400-year-old wounds, and if they aren’t addressed properly there will be continued mass protests,” Duncan said. “And that’s important, and there will be then the opportunity for provocateurs to try to derail that and bring violence.”

He added that the group will be ready to respond to potential “trigger points” that may prompt protests, such as the president refusing to leave the White House or “an unacceptable verdict in the trial of the murder of George Floyd.”

“And so there will be a need to help to make sure that people can express themselves and get their message out and it doesn’t turn into a message about destruction and violence,” Duncan said.